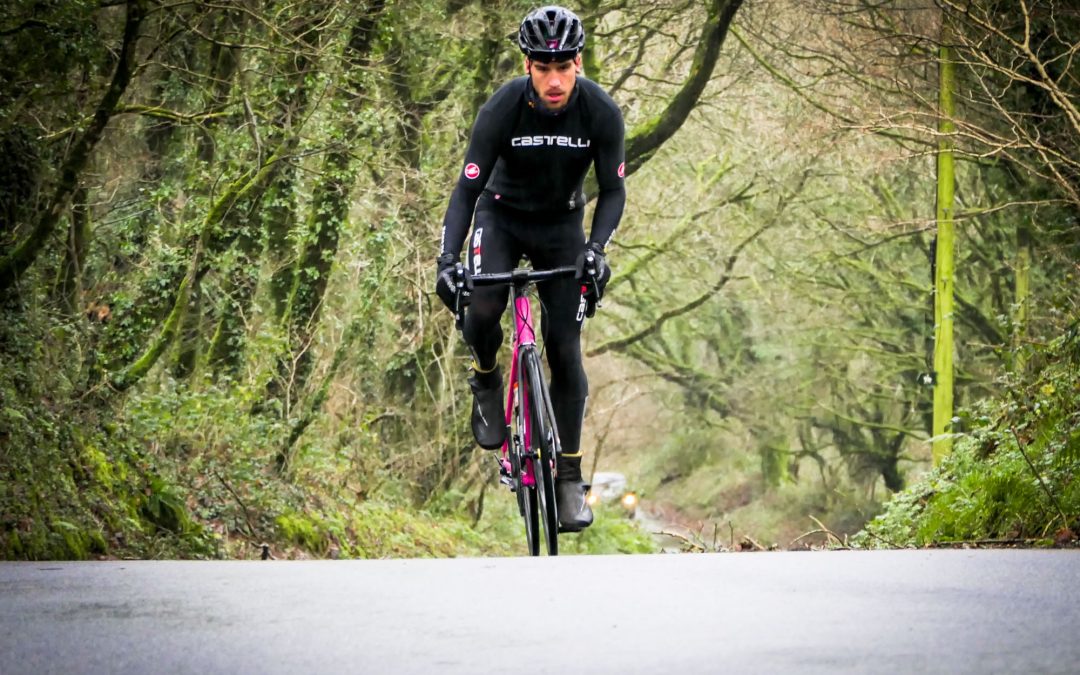 A winter ride on a not so winter bike.

Tom Walker of InnerFight Dubai was back in the UK recently and with his knowledge of the Tour of Pembrokeshire routes and the enjoyment he gets riding fast bikes, we invited him to ride the new Bullfinch RC44 Disc around its eponym; The Bullfinch Cycles 81 mile route and give us his opinion.  Tom’s competed in a variety of events over the past twelve months which have included both The European and Middle Eastern 70.3 Championships.  He’s done some ultra-challenges and crossed the Wahiba Desert in Oman, riding 160km non-stop on a fat bike.  In 2019, he’ll race the Dubai Marathon, the Dubai IRONMAN 70.3, IRONMAN South Africa and the IRONMAN 70.3 World Championships in Nice.

I was looking forward to a spin around one of the Tour of Pembrokeshire routes as some seven months had passed since I’d ridden the 2018 Paul Ties 100.  I was advised the Bullfinch 80 would be a better route to do considering the time of year.  Luckily I took the advice as the weather was being particularly British on the day we chose.  I was given a Bullfinch RC44 Disc which is a modern race frame design produced from oversized 853 ProTeam lightweight tubing.  I thought it was a stunning looking machine and after adding a few bits of kit and setting it up on a turbo trainer I ventured out into the cold which was a bit of a shock from the mid-twenties I’ve become accustomed to in Dubai.  It didn’t take long for the rain to come in and the wind to pick up.  Pembrokeshire has some of the best coastline in the world which the Tour of Pembrokeshire makes sure you don’t miss.  It does mean you don’t get much shelter from the elements, which meant I was in for a pretty long day.

Right from the off, I noticed how quickly the RC44 got up to speed, presumably aided by the massively oversized rear stays and then rewarded me by holding a steady 20 m.p.h. as I made my way down the coast from Crug Glas towards St Davids.  I really liked the Mavic Pro Carbon SL UST wheels which were paired with Shimano Ultegra disc brakes.  I felt sharp in the corners, confident on the descents and impressed at how well they spun up on the climbs.  I could tell that I was going to enjoy this bike.

I am used to riding lightweight top-end carbon machines. My experience with most ‘non-race’ bikes is that they tend to be a bit sluggish and heavy because they have robust and hardy kit on them which you can trust or don’t mind getting banged up a bit.  The Bullfinch frame and chosen components were far from slow and heavy and they gave me the confidence that I could ride it hard and in rough conditions and I’d be safe.  It also appealed to me that I was riding a British brand, built in the Midlands by British cyclists who clearly know exactly what the riders of Britain’s roads need.  Although this version of the frame is not equipped with mudguards, the RC44 is a good four-season bike. It’s a bike made to be ridden.  Being a Pembrokeshire born lad I was very excited to get back riding where it all began for me.  As I climbed out of Solva, I recalled how I used to suffer on some of the hills in the early days and realised that it is the Pembrokeshire climbs that essentially built my love for endurance sport that I have today.  Everyone knows Pembrokeshire is hilly and you can easily rack up 1000m of climbing in a 3 – 4 hour ride.  In Dubai, I would hardly go over 400m in a 4 – 5 hour ride.

It’s not unusual on wet days for your back wheel to slip on some of Pembrokeshire’s steeper hills but even on the 20% gradients I had excellent grip and I felt comfortable climbing both in and out of the saddle.  It shouldn’t be forgotten how the bike went on smooth roads either, the main road from St Davids to the turning in Pen-y-cwm was an absolute blast!  You’re tucked in, turning the pedals over nicely and just amazed that the bike will sit at 30 – 35kph as the rain and wind do their best to slow you down.  For me, the faster main road sections are an excellent addition to the Tour of Pembrokeshire routes, cyclists do love the challenge of hills but they also love fast stretches where the higher-end bikes really perform.  All four of the Tour routes have such a spread of terrain, they cater so well for the all-round-cyclist or purists as they liked to be called.  It’s interesting to see how your legs react to the beating Pembrokeshire gives them, a real stand out point for me was that I’d unboxed the bike that morning and ridden for four hours with no pain or discomfort whatsoever, a great testament to Bullfinch knowing the terrain of the UK and forming a geometry to handle it. It was a day of extreme contrasts in many ways, Pembrokeshire has unlimited roads to ride with a hilly surprise around every corner.  One moment you’re flying down a hill just about seeing the speed on your Garmin tick over 70 km/h, the next you’re close to standstill and trying not to spin the back wheel as you head up a 20% gradient.  Rides in Dubai are completely different, unless you take the two hour drive to the mountains there are no hills and in seven months I’ve got to know the smooth flat surfaces of Al Quadra bike track like the back of my hand.  Pembrokeshire pushes your bike to its limits, I’ve lost count of the snapped gear hangers I’ve witnessed at the foot of its hills, brake cables and pads need changing like socks and you check your headset bolts before every ride.  Dubai is almost too easy, I’ve not used the small chain ring since I moved there and you only brake to stop at the end of a ride.

All these contrasts made me really look forward to getting back to ride the Tour of Pembrokeshire.  Another contrast is obviously the temperature. Training in hot climates does have some benefits for performance in colder climates.  Your blood volume increases so you transport oxygen around the body faster and more efficiently, you also have a lower core temperature and an enhanced sweat rate response meaning you stay cooler for longer, which when working hard in full winter clothing can make a real difference.  The day I rode The Bullfinch 80 mile route, I questioned this lower core temp business, I could have definitely done with it being a few degrees warmer!  What it did mean however, was that I got to enjoy the roads of Pembrokeshire without worrying about not being ‘hill’ fit.  This made the bike more fun to ride and push harder.   One contrast that wasn’t so obvious was the one between a steel frame and a carbon frame. I’ve ridden some cheaper steel frames in the past but I have ridden carbon frames for most of the time.  A lot of steel frames I’ve ridden are ’soft’ in corners, you can’t whip them in the opposite direction like you can with a stiff carbon fibre frame and when you put power back into the bike it feels unresponsive, almost lazy.  Asking me to describe the difference between the Bullfinch RC44 steel frame and the carbon framed bikes which I’ve ridden for thousands of miles, is an extremely difficult question that basically I can’t answer which is a testament to the Bullfinch.  I rode my usual pedals and a similar wheel set, so it is actually a close comparison.

I would buy a Bullfinch.  Consistency trumps everything when it comes to endurance sport, having a bike that can get you through the worst of a British December day and still let you have some fun is a big win for me and the fact that it will do that over four seasons makes great financial sense.   Most people resign themselves to the turbo trainer in winter, when I lived in the UK I was certainly one of them but having a bike you know was designed for the beaten up roads of Britain sitting at home makes you want to go out and ride it, which is exactly what I did every day that I was home.  I did a hill reps session on it the day after I rode the Bullfinch 80 mile route and some longer rides with my brother who was more than impressed.  The only thing I’d change is the colour… but apparently it suited me!